Author Krista Walsh and I “met” when our stories were pubbed in the Day of Demons anthology by Anachron Press last spring. I was super excited for her when she shared that she was working with best-selling author Devin O’Branagan (along with a few other authors) to create a compilation of novellas based on Devin O’Branagan’s novel, Witch Hunt.

Devin was kind enough to give me a copy of Witch Hunt of the Blood to review.

Starting on page 1, I was sucked into a vivid historical world. Immersed in WWII England, I followed along the lives of the Hawthorne witches, sharing their joys, feeling their pain, and suffering their tragedies. The stories continue from there, and they are all just as strong.

When I read paranormal (and I read it a lot), the focus often becomes about the characters powers and how it impacts their lives. What I find different about this anthology is that I feel like I get to know the characters first. As a result, I get to know each person, well, as a person. The fact that they are witches isn’t necessarily secondary, but it’s part of the whole.

Another way to look at it is that most paranormal (at least the stuff I’ve read) focuses on the paranormal world and the characters become further drawn into it, leaving their original (and dare I say, normal?) world behind. In this anthology, we see the characters living in the “real world,” as it were, and their powers are a part of it.

I’m so glad I came across this anthology.

The anthology begins with O’Branagan’s own novella about the Hawthorne matriarch, Vivian. She and her fellow British witches work together to prevent a Nazi invasion during World War II. Then there is Colonial maiden, Bridget, who struggles with the guilt of failing her family in Salem, 1692. Her younger sister, Prissy, mysteriously disappears and finds another magical world. Julia, torn by family loyalties, love, and her spiritual quest, pays a huge price to continue the bloodline. And Miranda uses her powers against the great influenza outbreak of 1918 – but finds the ultimate foe is prejudice against her kind.

Discover what was left out of Witch Hunt and revisit your favorite characters with these exciting novellas. The story isn’t done until the battle’s lost and won.

Witch Hunt of the Blood on Amazon

Witch Hunt of the Blood on Goodreads

I’m so excited to bring information about a collection of novellas based on the best selling novel, Witch Hunt. A writing bud of mine, Krista Walsh, has a story in the collection–WOOT! So, read on and see if this strikes your fancy. (Ain’t the cover GORGEOUS?!)
Today’s post highlights which character each author would be.
If you could be any character from the WITCH HUNT series, who would you be and why?
Keri Lake:
Of course I like my character Miranda, but if I had to choose another it would be Margaret Hawthorne.  I admired her strength not only as a witch but a mother as well.
K.L. Schwengel:
I think I would be Melanie. Not that I want to be that young again, but because there is something special about her. She needs to find her path yet, but I think she’s stronger than she knows.
Krista Walsh:
I would want to be Cordelia, Vivian’s grandmother. She’s wise, compassionate and very respected for her abilities, which are themselves very impressive.
Suzanne Hayes Campbell:
I would definitely be Rose. She’s a strong pragmatic woman who makes the best of a bad situation. Several bad situations, really. She doesn’t stand on ceremony, and really doesn’t give a flying buffalo chip what people think of her. She boldly goes where lesser women fear to tread. Her fearless, can-do attitude is inspiring.
Devin O’Branagan:
Leigh. She begins as a timid, insecure woman who fights to claim her inner strength. Ultimately, she discovers The Goddess within and becomes incredibly powerful. Very inspiring! 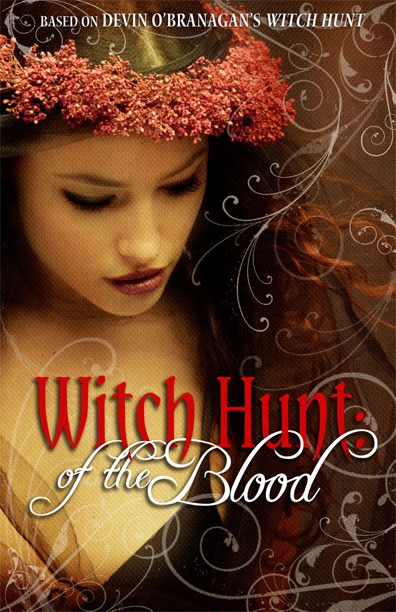 Five novellas based on Devin O’Branagan’s bestselling novel, Witch Hunt!
You’ve closed the cover on Witch Hunt, but the story isn’t over … yet! Devin O’Branagan has handpicked writers to take up her characters’ stories and explore what happens next.
The anthology begins with O’Branagan’s own novella about Hawthorne matriarch, Vivian. Vivian and her fellow British witches work together to prevent a Nazi invasion during World War II. Then there is Colonial maiden, Bridget, who struggles with the guilt of failing her family in Salem, 1692. Her younger sister, Prissy, mysteriously disappears and finds another magical world. Julia, torn by family loyalties, love, and her spiritual quest, pays a huge price to continue the bloodline. And Miranda uses her powers against the great influenza outbreak of 1918—but finds the ultimate foe is prejudice against her kind.
Discover what was left out of Witch Hunt and revisit your favorite characters with these exciting novellas. The story isn’t done until the battle’s lost and won.
This anthology contains novellas by Devin O’Branagan, Suzanne Hayes Campbell, Keri Lake, K.L. Schwengel, and Krista Walsh.
All five authors of the anthology are available for discussion at Devin’s writers’ forum. This is the link to chat with them: Chat With The Authors!
Witch Hunt: Of the Blood is available in both print and eBook formats and may be found atAmazon, B&N, and Smashwords. (Smashwords provides copies compatible with almost all types of eReaders including Sony, Apple, Kobo, etc.) It is also available internationally via Amazon worldwide!
Two of the stories in this anthology are bridges to the upcoming sequel, Witch Hunt: Resistance, which will be released in 2013.
The original Witch Hunt is an international bestseller first published by Simon & Schuster’s Pocket Books. It has been translated into German and Turkish and is consistently on the bestseller lists. It is the story of 300+ years in the history of a family of witches, from the time of the Salem trials to a modern-day witch hunt. It begs the question: could it happen again?
Witch Hunt is available as both a paperback and an eBook. It is available at Amazon, B&N, and Smashwords.
PS: I’m reading it now. I love how the authors have created a world that draws you in and refuses to let you go until you reach the end.
**********
Heather McCorkle is releasing a fantasy novel and I’m pleased to be a part of the cover reveal (even if I’m late to the party).
SO COOL!

On Yacrana, dragons stand at the top of the evolutionary ladder instead of humans. Such an advanced species is not without its issues though.

There’s trouble in the Dragon Empire, the kind that could start a war between dragons and the races of people. Hidden factions of dragons believe they should rule the lesser races, not simply stand aside and allow them to develop as they will. Having lived so long in peace, the Emperors turn a blind eye, many oblivious that such attitudes even exist.

Despite being only an architect class, emerald dragon, Grendar is willing to risk banishment and death to stop that which his rulers refuse to see. The hope of peace lies not within the scaled breast of a dragon however, but within the hands of a group of people. But if the hidden factions have their way, these people won’t live to fulfill such a destiny. With a reluctant seer at his side, Grendar must leave his precious Empire for the outside world to save those that will one day save his kind.
Goodreads: http://www.goodreads.com/book/show/17158656-the-dragon-empire

AUTHOR BIO
Heather McCorkle
I am an author of fantasy, in all its many sub-genres. Living green, saving endangered species, helping other writers, and supporting fabulous authors are a few of my passions. I am also a volunteer for the IS Foundation which works to make the world a greener place. When I’m not volunteering, writing, or surfing my social networking sites, I can be found on the slopes, the hiking trails, or on horseback. As a native Oregonian, I enjoy the outdoors almost as much as the worlds I create on the pages. No need to travel to the Great Northwest though, you can find me here, on my blog, and Monday night’s on Twitter where I co-moderate the #WritersRoad chat.
Author Links:
Website: http://heathermccorkle.blogspot.ca/
Goodreads: http://www.goodreads.com/author/show/4957267.Heather_McCorkle
Facebook: https://www.facebook.com/pages/Author-Heather-McCorkle/211058455603533
Twitter: https://twitter.com/HeatherMcCorkle