I’m so excited to have Cally Jackson with us today. She wrote THE BIG SMOKE, a New Adult Contemporary Romance.

It follows two protagonists as they move from their country homes to the city of Brisbane, Australia. Cally expertly captures Ceara and Seb’s voices and shows the world through their eyes in stunning fashion. Nailing voice and POV is not an easy task, particularly when the thrust of the work is based on emotion.

Which leads me to my next point (and why Cally’s here with us on a Mental Health Monday).

Not once did I get the feeling that the characters’ emotions were false. Not once. That means THE BIG SMOKE is authentic, true, and an incredibly worthy read!

Before I get off on too big of a tangent, let’s let Cally take the reins!

Hi Cally! Welcome to Mental Health Monday. Tell me, how did you develop such honest, flawed, and true characters? Any tips for writers?

Firstly, thank you! I’m thrilled to hear you connected with my characters. I really wanted to develop characters that were three-dimensional and that people could relate to. My first draft didn’t achieve this, as I learnt when I had the manuscript professionally appraised. When I received that feedback, it was a blow, but it was feedback I needed to hear to push deeper and really bring my main characters, Ceara and Seb, to life.

The key for me was getting to know Ceara and Seb (and the supporting characters) on a deep level – what were their biggest fears? Their biggest dreams? What memories tortured them? How did they see themselves and how did that compare to how others saw them? Once I knew this detail, I had to work out how to show it through their narration and the story line, so that it unfolded organically rather than feeling staged.

In terms of tips for writers, I’d encourage them to consider how they can show the varying dimensions of their characters. We all have many layers and the best characters are as complicated and multi-faceted as we are.

I recently read your The Year I Turned 18 Blogfest post, and could see glimpses of The Big Smoke in your own experience—as far as what it was like for you to leave home and go to Uni. What inspired you to write The Big Smoke?

You’re right – there’s a lot of me in my writing. I wrote a post on Steph Bowe’s blog recently about how I blended fact and fiction in The Big Smoke.

The inspiration for The Big Smoke was a lesson I was trying to teach myself. For some reason, I decided the best way to teach myself that lesson was to write a book about characters having to learn the same lesson (makes perfect sense, right?).

What was the lesson? That your happiness and life journey are your own responsibility, nobody else’s.

Well said. What’s your technique for drawing out authentic emotions in your characters?

I don’t know if my technique is anything ground breaking – it mainly involves taking my hands off the keyboard, closing my eyes and imagining what it would be like to be in the situation my character is experiencing. What would it feel like? What thoughts would be running through your head? What would you notice about your surroundings?

The next step is working out how to convey that information through the character’s voice in a fresh way. That’s the tricky part!

Sure is! What draws you to the contemporary genre?

I enjoy tackling real life issues and conveying situations people can relate to. Some of the most uplifting stories I’ve read are those that introduce you to real, flawed characters and take you on their journey as they confront and overcome challenging circumstances – that’s what I hoped to achieve with The Big Smoke.

You most certainly did achieve that! Now, what’s been most challenging about writing?

Not giving up. I have a very clear memory of a time a few years ago when I was very early on in my rewrite of The Big Smoke. It seemed like I would never reach the end and I was seriously questioning whether it was all worth it. My inner critic had found a microphone and it was practically impossible to drown her out. I wrote a blog post about this experience – the weight of great expectation – which I read aloud at my book launch (to prove it’s possible to recover from those awful moments and achieve your goals).

Sometimes it’s hard to keep going, especially when the inner critic gets going. Good for you for sticking it out and finishing the rewrite! Switching gears a little, what’s been most challenging about publishing?

Balancing the time demands of publishing with my full-time job. If money weren’t an issue, I would happily spend all day on my indie-publishing responsibilities, but unfortunately that’s not possible! 🙂

I knew that indie publishing would take a lot of time, but I didn’t realise quite how much. My workload in my day job peaked around the same time as I launched my book and I’m also in my third trimester of pregnancy, so managing my time and my energy levels has been quite a challenge.

One of the biggest challenges I’ve faced on my indie publishing journey happened only a few weeks ago, when I had to confront the possibility of having a book launch with no books. Createspace’s website says that you can ship books to Australia within three working days, but when I tried to place my order on Tuesday 16 October for my book launch on Saturday 27 October, the estimated arrival date was Wednesday 31 October. Um, excuse me?! I knew that the three working days didn’t include printing, but I didn’t think that printing could account for the extra seven working days Createspace was saying it would take for my order to reach me.

I sent an email to Createspace explaining the situation, and they essentially said there was nothing they could do because they don’t guarantee timeframes for wholesale orders. What the?! Where exactly does it say THAT on your website?! Panic stations!

And of course, because Australia and America’s time zones are so different, I received this email at 2am in the morning. Naturally, I woke my husband up so we could try to figure out what to do. We discussed postponing the launch, trying to find a local printer who could print the books within the timeframe, going ahead with the launch without the books (my husband’s crazy idea), but eventually we discovered that if we placed several orders of smaller quantities, it would bring the delivery date forward to Friday 26 October – the day before the launch. Cutting it very fine, but that was our best option.

So, at about 3am on Wednesday morning, we placed four orders and went to sleep. One of those shipments arrived on Friday 19 October and the rest arrived on Monday 22 October. Crisis averted! Thank goodness! The lesson I took from this experience? Don’t rely on advertised shipping times, order as soon as you possibly can!

Yikes, that was a close call! Glad it worked out. Now that that hurdle is jumped, what’s next for you?

Considering I’m 31 weeks pregnant, what’s immediately next for me is becoming a mum. The dream is that The Big Smoke will become so unbelievably popular, I’ll be able to resign from my day job and be a stay-at-home mum and author.

In the slim chance that doesn’t happen, I’ll still write fiction in my spare time – writing’s in my blood. The idea I’ve currently fallen in love with is a young adult story with romantic, historical and science fiction elements. Quite different to The Big Smoke! One day, I may re-visit Ceara and Seb and write them a sequel. Time will tell… 🙂

Best of luck with everything, Cally. You’re sure to be busy with a new baby! Thanks for stopping by and congrats on releasing The Big Smoke.

More about The Big Smoke

Ceara’s desperate for love; Seb’s desperate to get laid. Ceara adores reading novels; Seb hasn’t finished a book in years. Two strangers, both moving from small country towns to Brisbane – the big smoke. As they prepare to attend the same university, their paths seem set to collide, but they keep missing each other. Maybe fate is keeping them apart, or maybe it’s just chance.

When the semester starts, things get complicated. Ceara’s best friend withdraws from her, Seb’s closest mate turns into a sleazebag, and the relentless demands of university make their stress levels soar. Before their first semester is over, both Seb and Ceara will be forced to question who they are and what they want from their lives. Will they have the courage to find the answers, or will they crumble under the pressure? And when they finally meet, will it be love at first sight or a collision of headstrong personalities?

You can purchase a copy of The Big Smoke:

You know you’re going to die.

You can’t breathe, your heart is pounding, sweat is pouring down your face and back. Your vision blurs, your tongue feels thick. Your stomach and bowels threaten to expunge their contents, like, immediately. Even ordinary sounds are jarring. Basically, your body has betrayed you without warning and regaining control seems impossible.

This is just a glimpse of what a panic attack feels like. Once the cycle starts, these intense bouts of anxiety can come without warning. The sufferer often worries about the next attack. Anticipation itself brings on the symptoms.

In other words, it’s a vicious cycle.

So, my question to you:

How would you write a scene of someone having a panic attack? Would you focus on his or her internal sensations or would you highlight the world around them, pointing out the details of his or her heightened perception?

Either way, the experience for the reader can be pretty intense, right?

Remember, this post is intended for writing purposes only and is NOT meant for medical treatment or advice. 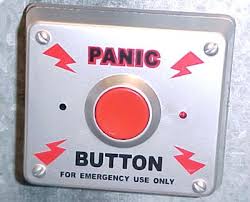