Please welcome author Colin F. Barnes. He shares with us an insight into the world of his novel, THE TECHXORCIST: ARTIFICIAL EVIL. 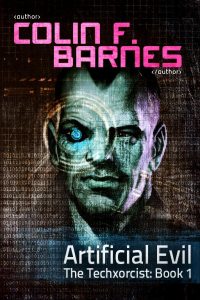 Artificial Evil, the first book in The Techxorcist trilogy starts out in the dome city of City Earth. It’s 2153 and the world has suffered a terrible Cataclysm. City Earth is humanity’s last bastion, housing no more and no less than one million souls.

Our protagonist, Gerry Cardle, is the lead algorithm designer for the death lottery. Because the city is so precious, the mysterious rulers ‘The Family’ make sure that all resources—including humans—are tightly controlled to ensure the on-going survival of humankind. When one dies, The Family allows another to be born, keeping the status quo.

Though it’s not as simple as that. One of Gerry’s jobs is to make sure the lottery only kills the right people. It wouldn’t be helpful if important members of society, government, and people with rare and valuable skills are bumped off by the D-lottery, so Gerry creates complicated algorithms to weigh everyone’s contributions. There is of course an exemption list; one Gerry himself is on.

The story starts when Gerry’s numbers inexplicably come up. He goes to his place of work: the giant tech company Cemprom who oversee and maintain all the city’s technological infrastructure, and tries to clear up the confusion with his boss. Only his boss is nowhere to be found, and so starts Gerry’s adventure as he has just 7 days left to save himself.

This is further complicated by the nature of how the D-Lottery is delivered. Due to The Family’s insistence on controlling everything, every citizen is fitted with an Artificial Intelligent Assistant. This self-aware piece of software sits in their consciousness and helps them stay connected to the citywide network, controlled by a series of underground super-computers. It’s via this interconnected system of AIAs that The Family, and the network, can enforce the D-Lottery. Along with these Intelligent Assistances, citizens are fitted with a dermal implant on their wrist; within this implant, amongst other technologies, is a highly concentrated dose of cyanide. When a lottery winner’s 7 days are up the network activates the cyanide release within their implant, and the person is then ‘recycled’ back into the system.

One of the mysteries that Gerry has to solve is the actual cause of the Cataclysm. Not only are their lives within the dome controlled, but also the flow of information. They are allowed to speak freely, and speculate, but the truth behind the cause and extent of the Cataclysm remains a guarded secret. Gerry is led to believe there’s nothing out there beyond the Dome; that everyone perished, and those that did survive were used for breeding a new generation of people within City Earth.

This view isn’t satisfactory to Gerry. Tasked with saving himself from the D-Lottery, he stumbles across two outliers. Two rogues: Petal—a teenage punk girl with a penchant for hacking and violence, and Gabriel an aging priest and burnt out hacker take him under their wing. They reveal how they live off the grid. They are the first Gerry has ever met, and though it’s highly illegal, and the sentence for being off the network is death, his two new friends show him an entirely different side to the City, and hint at what’s beyond the great Dome.

Join Gerry and learn more about the Dome, The Family and what really happened during the Cataclysm. 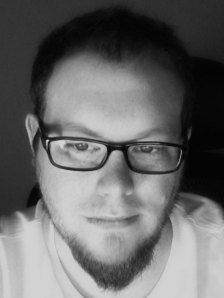 Colin F. Barnes is a writer of dark and daring fiction. He takes his influence from everyday life, and the weird happenings that go on in the shadowy locales of Essex in the UK.

Growing up, Colin was always obsessed with story and often wrote short stories based on various dubious 80s and 90s TV shows. Despite taking a detour in school into the arts and graphic design, he always maintained his love of fiction and general geekery. Now, as a slightly weathered adult, Colin draws on his experiences to blend genres and create edgy, but entertaining stories.

He is currently working on a Cyberpunk/Techno thriller serial ‘The Techxorcist.’ which combines elements of Sci-Fi, Thriller, and Horror.

Like many writers, he has an insatiable appetite for reading, with his favourite authors being: Stephen King, William Gibson, Ray Bradbury, James Herbert, Albert Camus,  H.P Lovecraft, Clark Ashton Smith,  and a vast array of unknown authors who he has had the privilege of beta reading for.

Three hackers. A deadly plot. One chance to save humanity.

2153. Post-cataclysm. The last city exists beneath a dome where the mysterious benefactors ‘The Family’ tightly control the population with a death lottery and a semi-autonomous network.

All is well until the day family man Gerry Cardle, head of the death lottery, inexplicably finds himself the no.1 target of a malicious Artificial Intelligence. Gerry’s numbers are up, and he has just 7 days to save himself,  find the source of the AI, and keep the last stronghold of humanity safe.

Gerry finds help in the shadows of the city from two rogue hackers: Petal – a teenage girl with a penchant for violence, hacking systems and general anarchy, and: Gabriel – a burnt-out programmer-turned-priest with highly augmented cybernetics.

With his new team, Gerry discovers there is more beyond the dome than The Family had let on, and his journey to find the source of the AI leads him through a world of violence, danger, and startling revelations.

Everything is not as it seems.

Gerry is not who he thinks he is.

Evil can be coded…. can Gerry and his friends stop it before it destroys humanity?

Artificial Evil is book 1 of 3 of The Techxorcist series. The larger-than-life offspring of Blade Runner, Mad Max, and The Exorcist.

“Artificial Evil: Book 1 of The Techxorcist sees the revival of everything we used to love about cyber punk, repackaged with new twists in this tech thriller. This is a brilliant tale that combines fantastic characters, great tech and a little bit of good old fashioned possession” – Adele Wearing, Un:Bound

“The Techxorcist project piqued my interest for a couple of reasons. First, it is the brainchild of Colin F. Barnes whose work has, to date, always lived up to expectation. The second reason is the title; not only is it fun to say, but it also sets the tone for a grim cross-genre design.

Having had the pleasure of reading Articificial Evil: The Techxorcist Book 1, I can honestly say I was not disappointed. The quality of the writing, the originality of the ideas – they blend together to show Barnes’ work at his best. The passion behind the project comes through every description and in every brilliant character – once you meet Petal, you’ll understand.

Artificial Evil reads as multiple stories at the same time. On the surface a fantastic plot-arc following a post-apocalyptic virtual battle against an evil AI, the brilliance is in the layers of interpretation going on behind the scenes. There are elements of a dozen classic tales intricately woven into the characters, the concept, and the dialogue, and the combination creates a story that is so rich in meaning and allusion it’s impossible not to connect with this seemingly distant and unrecognizable world.

A story that opens the mind to possibilities, crazy ideas that somehow seem plausible, Texchorcist is an exploration of how much we’re willing to give up to be free, and how far we’re willing to go to keep that freedom.” – Krista Walsh, Raven’s Quill.

Artificial Evil: Book 1 of The Techxorcist is available as a paperback and ebook from:

Thanks, Colin! I really enjoyed reading Artificial Evil–the world you created is fascinating and this glimpse into it has been super interesting and fun. Can’t wait to read the next book!

Tomorrow, we’ll be chatting about Jessica Bell’s Show and Tell in a Nutshell–very informative book if you’re a writer struggling with show vs tell (I know I do!).

Come back Friday, November 30, for an interview with Colin–we’ll learn what makes him tick, folks!